Getting started with excel

Examples of some basic Formulas available in Excel #

Excel has many Formulas built right in. Here are a few examples of some of the basic Formulas that might be handy to know when getting started with Excel:

Important Note : The name and Syntax of these Formulas vary on the language of your Excel installation! For example this Function here :

Not only the name is different but also some minor parts of the syntax! For example in the German version ; is used instead of , to separate the parameters.

A lot of Formulas use a range of cells. To give a range you reference the first cell in the top left corner such as A1 and the bottom right corner such as B3 and place a colon “:” between them like this A1:B3. This will give you a range of 6 cells in two columns and three rows:

Sum Adds all numbers in a range of cells.

Count() Counts the number of cells in a range that contain numbers.

Counta() Counts the number of cells in a range that are not empty.

CountIF() Counts the number of cells in a range that meet a given condition.

CountBlank() Counts the number of empty cells in a specified range of cells. 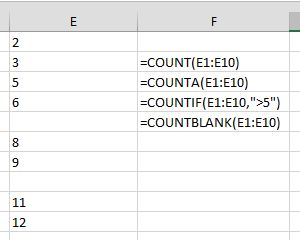 There are also many string Formulas.

left Returns the specified number of characters from the start of a text string. =LEFT(String,Number of Characters)

right Returns the specified number of characters from the end of a text string. =RIGHT(String, Number of Characters)

mid Returns the characters from the middle of a text string, given the starting position and length. =MID(String, Start Position, Number of Characters)

These three Formulas count the characters of the string starting with position 1 being the first character.